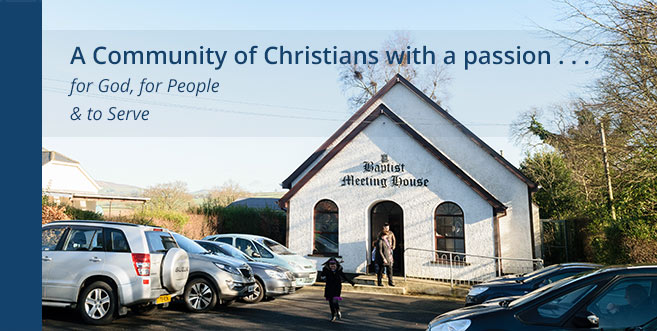 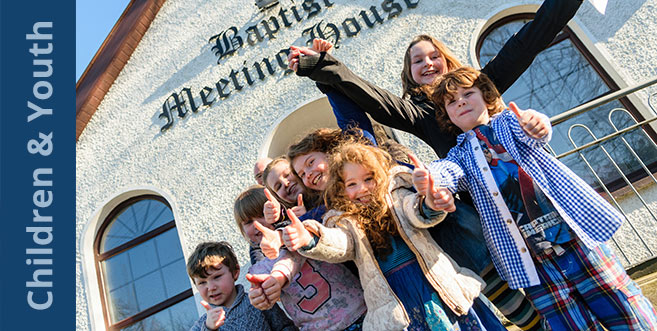 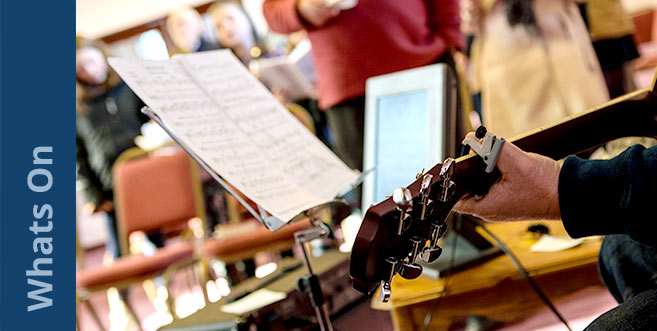 The beginnings of the Baptist Church

It is fascinating to reflect upon the providence of God in bringing together the circumstances and the people leading to the eventual establishment of the Baptist witness.

The Londonderry church in its outreach programme had occasional open air meetings in the village in the 60s. A couple in Ballygomartin were praying for relatives who were living in the Strabane area, that God would establish a Baptist church somewhere locally. A number of recent converts through a mission in the Glentimon Orange Hall were disturbed by the absence of a clear, distinctive, evangelical church in the area, and were meeting together for home Bible Studies. Two Baptist men, W J Hewitt and Sammy Howell came to work in Omagh at around that time, who were to give support and encouragement to those who were interested in a Baptist church in the area. The pastor of Omagh Baptist Church at that time was the late J C Henry, always an evangelist at heart, and never daunted by an opportunity and challenge to advance the cause of the Gospel first, and the spread of Baptist life and witness second.

David and Connie Aiken had been baptized some years previously in Londonderry before moving to live in Strabane, and became increasingly unsettled with their paedo baptist church connections in Strabane. Inclined towards Baptist convictions, they contacted Pastor Henry, and with his encouragement, began to attend the Baptist church in Omagh.

There were Christian believers living in Sion Mills, including a small but stable Brethren assembly, but the ‘main denominations’ as they are termed were decidedly non-evangelical. Inexplicably a number of believers continued to support churches where the latter was the case.

Prayer meetings were commenced in the Aiken home in Strabane in November 1970, and a regular Sunday afternoon service in Strabane Orange Hall, the only building made available to the interested group. Jim Henry and the friends from Omagh supported this work wholeheartedly, and the small group of believers began to think about some kind of an evangelistic outreach in the area. Again the providence of God was evident in that a young Sion girl, Sheila Craig, had married an enthusiastic Baptist, Clive Johnston, and Sheila’s father Tommy was happy to grant a site for a tent mission in one of his fields at the edge of the village of Sion Mills – in Liggartown – hence the shift in focus and location from Strabane to Sion Mills. 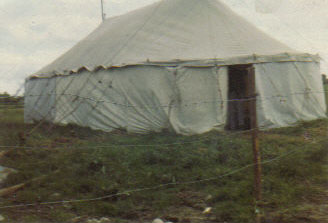 The tent mission was conducted by Jack Johnston and Ian Dixon, Home Mission evangelists, and significant interest was created so that when the mission itself concluded in early July 1971, Sunday evening services and midweek prayer and Bible Study continued to be held in the tent until mid-September. The believers then obtained the use of a portable hall which was erected at the top end of New Street, and this was to serve as the meeting place for just over a year. Those who met in it, and who preached in it, recall the gas lighting, the pedal organ, and the stones thrown onto the tin roof by some of the local kids. 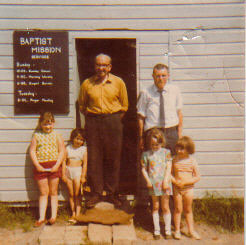 Ian Dixon remained to lead the work for six months after the mission, and then accepted a call to a pastorate in Greenock, Scotland. Local preachers and regular visits from the students of the Irish Baptist College, backed up with help from the Omagh church constituted the basis for the ongoing ministry in the fellowship. By this time the little Sion fellowship had begun to meet on Sunday mornings independently of the Omagh church of which a number of them were members. This was with the blessing of the Omagh church, some of whose members continued to support the work by their constant visits and unwavering support.

In the Spring of 1972 a small cottage on the present church site became available for purchase, and through the kindness and generosity of the late Tommy Campbell of Omagh, who loaned the little fellowship the asking price of £1700 for the property, the purchase was made, and work began to renovate the cottage and make it suitable for meeting in. This was only one example of the generosity of those who were committed to the establishment and progress of the work. It was wholehearted, practical and prayerful. 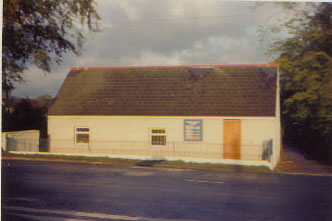 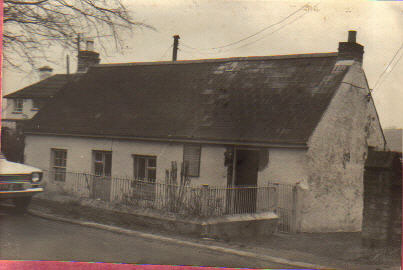 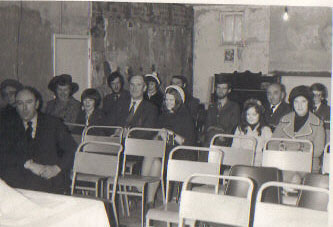 Help was offered from members of the ‘local’ Omagh, Derry, and Knockconny Baptist churches, and from others further afield and the cottage was transformed into a little meeting house, small and simple, but comfortable and a definite step-up from the tin-roofed hall in New Street! No more bricks on a hot or cold tin roof!! The contribution of Pastor Jim Smyth of Knockconny Baptist must be singled out, for he gave a sterling lead in getting the sleeves rolled up and getting stuck in to the hard labour.

John Birnie (IBC student) was given an IBHM summer appointment to work with Pastor J A Smyth in the Tyrone area, with special emphasis on open-air evangelism. Robert John Ferguson, an IBHM colporteur joined them, and for six weeks the man engaged in visitation, open-air meetings, and personal evangelism in the towns and villages on the more westerly part of Co Tyrone.

That summer arrangement did two things. It provided the Sion fellowship with a period of consecutive ministry, and it was the means of giving John Birnie, who had preached several times already in Sion, a deeper insight to the challenges and the potential of the work in Sion, and the possibility of a church plant there. In the event he made application to the Home Mission and was appointed as an Evangelist to the work in Sion commencing in September 1974. David Aiken, the first Church Secretary, in a report given at the constitution of the Church [7th Sept. 1976] made grateful reference to help received first from the old Northern Baptist Association in sustaining and developing the work, and then to the Irish Baptist Home Mission under whose auspices Mr Birnie was appointed.

From the beginning of the work there was a depth of commitment and faithfulness on the part of the small group of believers which was truly commendable and augured well for the future. Early reports submitted to the Home Mission speak of encouragement and blessing as the various aspects of the work developed with this quality of support and involvement. Sunday School work was initially small but steady, and the Children’s meeting was at the beginning a shared work with local CEF involvement. The reasons for this were partly historical, and partly on account of a shortage of manpower, a matter for which prayer was requested. Sometime later that prayer was answered, the needed manpower was supplied and the Children’s work came under the sole leadership and direction of the Baptist fellowship.

Constitution of the Church

Initially the Home Mission through the steering committee had envisaged the constitution of the church within five years. It was thought that this period would be sufficient to consolidate the group of believers there and perhaps add to their number to provide a satisfactory base for a church. In the event, due largely to unhappy circumstances in the Omagh church in 1976, and also in light of the commendable commitment of the members of the Sion fellowship, the decision was taken to constitute the church in September 1976. This was done in full fellowship with the church at Omagh, and with the guidance and help of the Home Mission.

Tuesday 7th September 1976 was the date set for the Constitution Service. The preacher was Pastor J C Henry whose involvement and input at the beginnings of the work had been so influential and encouraging. The ‘overflow’ congregated outside in what had been the cottage garden, and through the open windows they were able to follow and be involved in the service. Twenty-one members signed the church covenant and constitution as founder members of the church.

At the first church meeting held on 2nd December 1976 Mr John Birnie was recognised as a church elder. Arrangements were also made for the election of one more elder and two deacons at a meeting to be held on 5th January 1977. At that meeting Mr David Aiken was elected elder and Mr Ivor Lucas and Mr David Wolfe were elected deacons. David Aiken was also elected to serve as Secretary of the church, and Ivor Lucas as Treasurer.

Other items on the agenda of the earliest church meetings included preliminary discussions about an evangelistic mission, later finalised for October 1977; the possibility of buying or building a manse; and the upkeep and repair of the cottage in which the church met. The minute book reports that by the end of May 1978 the purchase of a manse at 41 Laurel Drive, Strabane had been agreed.

On 20th February 1977 the church agreed to apply formally for membership of the Baptist Union of Ireland. 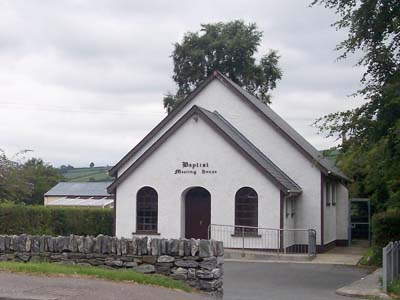 From the beginning of the work it was recognised that the cottage purchased and renovated to some extent, could not provide a long-term meeting place for the church. The decision had been taken to first find a manse, and when that had been achieved in 1979 thoughts naturally turned to the provision of a more suitable meeting place.

The formal decision to erect a new building was taken at a church meeting held on 22nd November 1978. Initial drawings were requested and these were eventually presented to and accepted by the church in October 1979. Detailed plans for submission to the planning authorities were subsequently prepared and building work began in January 1981.

The building was completed and officially opened in the first weekend of September 1981, and the enhanced facilities and extra space were soon put to effective and busy use.

The first baptismal service in the new building took place on 14th February 1982 when four were baptised and, with one other young man already baptised, received into membership of the church.

Today, the church in Sion is still growing. Historically it has never been a big church. The reason for this is down to the fact that it's become a sending church. Many many people have come through the doors of the church. Some have moved away from the area for various reasons, some because of work, others have got married, while others have gone on to serve the Lord in other parts of Ireland and the world. The church still continues to be a community of Christians within its community. It still seeks to be a caring church, a community church, a loving church, and a gospel centred church.

We want people in our community of Sion Mills and district to know the Lord Jesus Christ, as their own and personal Saviour. And so we work hard to share our faith and the love of God so that our neighbours and friends can know that there is more to life than this. Is this life just about living for ourselves, working, raising children and then we die? There is hope beyond this life and beyond the grave. Christianity is more than a religion. It's about a relationship. Jesus offers eternal life to those who follow him. We can know that our sins are forgiven. We can know that we’re at peace with God.

The bible tells us that "Christ died for the ungodly"

And God's offer of salvation is still a free gift. Jesus says, "come unto me."